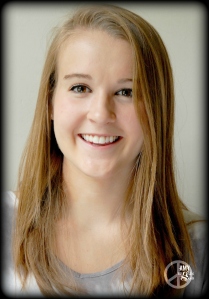 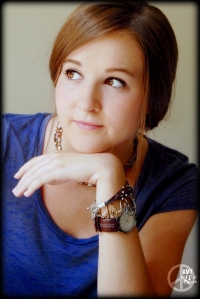 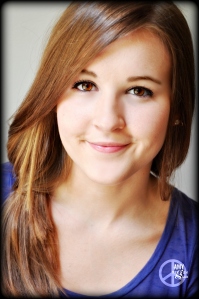 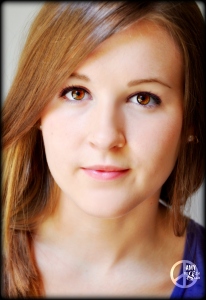 This is Elizabeth. She came to me for RUSH pictures. i asked her if she would be willing to let me play around with her hair for the blog. She said she would (YIPPPEEEE!!!) the first shot, the one with her in the lavender/white shirt, was what she was wearing when she got here. i asked her, before i got a close look, “what color are your eyes?” “they used to be brown, but they’ve gotten lighter…” i look & told her she has TIGER EYES. She had never heard of that before. I told her the color is rare AND DAMN, i was so excited to have her.

when i am shooting someone for my blog, i always ask for them to try & chose a solid shirt/dress. To bring out the orange/yellow of Elizabeth’s eyes the color she needed was/is blue (luckily, my daughter was the same size). when the photograph is viewed (see above, 1st image), a printed shirt tends to direct our eyes toward the shirt & it is as though the face is somehow…lost. Elizabeth wears her hair parted on one side. the images of her in blue were taken for this blog post. I parted her hair on the opposite side, which softened her face, it also changed the focal point of her face…instead of her forehead & smile, the eyes became the focal point. the eyes, in photography, are the most important feature to capture…amazingly, the blue also appears to bring out the golden highlights in her hair as well.

i’ve been doing portraits of people since i was in high school. when i was 25, i went to cosmetology school, i thought it would help with portraits. i think it helped my photography a great deal. I don’t ask everyone if i can play with their hair (some people would think i was nuts)…only the young ones. i also ask if i can edit their make up or put in a natural arch in their brows, if they haven’t ever done that before. She said yes to everything. Lucky me

This is Elizabeth, the girl with the tiger eyes. ~amy