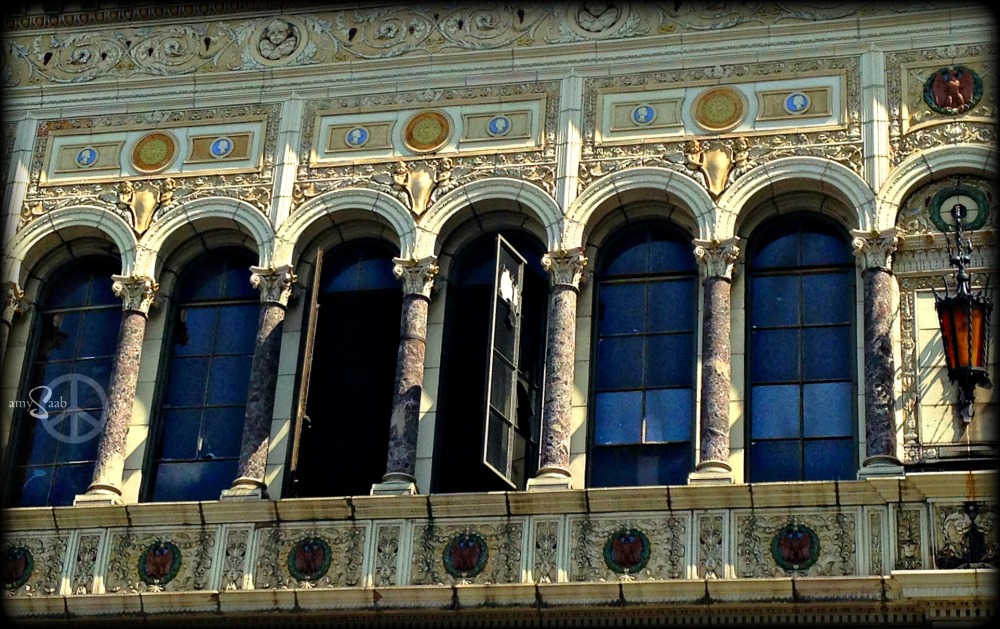 I’ve tried twice to capture the amazing mix of architecture of downtown Birmingham. The first time, i went downtown on a Sunday morning, with a friend who grew up in Paris. I had my Nikon with me & gave my friend an older one. As we came around a corner, we were confronted by a tall, maybe 6 foot tall white man, with blond hair & blue eyes, wearing only a tan raincoat, socks & sneakers…he flashed us. my shock rocked me still. the man asked if we wanted some of “this” referring to his nether regions…my city wise friend shut him down with a laugh of disdain & “no, we’ve had much bigger.” she showed not once ounce of fear & it was the man’s turn to be shocked still. He slowly closed his coat & walked away very dejected, his head hanging down in shame.

But it kept me from going back downtown to shoot alone again. Yesterday, i decided it’s Monday & people of all kinds will be out, some working, others…who knows. i had to drive my husband downtown to collect his car, i brought only my phone because pain owned the day. But as i looked out the passenger side window, my art brain overpowered the pain & i told my husband that i would be a little late coming home because i was going to stop & take a few shots. I parked near the Alabama Theatre & i took about five shots, but out of the corner of my eye, i could see a black man, about 5’9″ 145lbs, in a grey t-shirt, old dress pants & brown boots (untied) cut across the street directly toward me. i put my phone in my pocket, put my longest key between my fingers, facing outward(standard defense). i walked quickly back toward my car, but he fell in time with my step & he held out three Mardi Gras bead necklaces, (red, green & gold) he said, “would you like to buy some beads? They are rare” (yeah, in the south, Mardi Gras beads are as plentiful as there are stars in the sky) this is when I stepped off the sidewalk, on to the one way, four lane road…walking into oncoming traffic, i walked in the street until i reached my car. He mumbled a few other words, but I didn’t hear any of them, due to the cars whizzing past me. When i was in my car, i looked in the rear view mirror & he was looking back at my car with a big smile, he was laughing. i don’t know if he would have hurt me, there were other people walking around, but on the other side of the street. But most of us can tell when someone is a little off…

what did scare me?

maybe it was the guy, on a Vermont highway way back in 1990, that stopped his beat up yellow half car/half truck thing…i rolled my window down just enough to listen to him, because he backed up almost to my car in a crazy way & walked all crazy. He was white, blond greasy hair wearing a baseball cap. He asked if i needed any help. I, as strong as an ox, lied to his face about a friend left with a cop to get a tow truck. He looked at me for a while, then wobbled back to his car/truck (brat?) started it up, put the gear in reverse & slammed into the front of my car, drove forward about five feet, backed into my car enough to start pushing it backwards. He hit the front of the car five times before he drove off.

Or maybe it was the guy (17 yr old, blond, 5’10”) who trapped me, when i was 12 yrs old, in the hay loft of his families barn & started to attack me…i fought hard & very loud. Then i heard my twin brother calling me from right outside the barn & the guy was forced to stop.

I told no one of this event either.

Or maybe it was the guy who followed me home on a cold winter night through downtown Burlington, Vermont. A man that kept my pace & said nothing, when i moved faster, so did he. When he finally thought we were rural enough, he put his hand on my shoulder & my boyfriend’s husky lunged at him. He told me to control my dog. Right.

I’m 5 feet tall, i used to be 5’2″ before all my fusions & messed up pelvis brought me down an inch. I am small. So are my daughters. My daughters who rolled their eyes at me when i wouldn’t let them go for a walk without taking a dog.

I finally told my daughters about these events…except for yesterday, but i will. The key in the fist is important for them to know, even though they have no keys yet. When i told them…i started with, “I know you think nothing bad will ever happen to you…but these things happened to me…” i got them to listen.

if you are a mother to a daughter, when they are old enough for to hear how babies are made, then that is when you need to share your own experiences with them. Because if i had held my tongue & something happened to either one of them. I would never, ever forgive myself. You may raise strong smart daughters, but there are some big, strong dumb & dangerous men out there…your daughters need to know that.