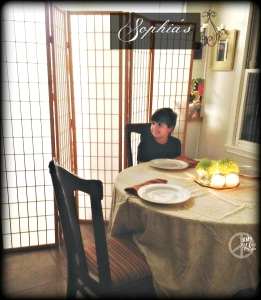 “Sophie, i want you to make dinner tonight” i said.

i was in my art studio, writing up a grocery list. she came in, sat down in a chair & put her head on the table. i asked, “and this drama means what?” she extended her arm, with a hand, groping the air in search of me. she said, “i need you, mom” i was then hugged. “what do you want?” She wanted my Macbook after dinner. i informed her i needed her to come to the grocery store with me. she decided on about five different ideas for dinner, while loading the cart with the ingredients for all.

when we returned home, the kids schlepped groceries up the stairs & put them away.

then…the cool part began. Sophie said,”No one is allowed into the kitchen for any reason what-so-ever, if you need something, i will bring it to you”.  I can have her order me around like this any day.

Sophie came to my son, Henry & i in our bedrooms & said, “you are to follow me” she had a dishtowel over her forearm. I asked if she was our hostess. “yes, i am everything tonight”

we have two ways to the kitchen, the short way, or the long way (going through our living & dinning room.) she took us the long way. as seen above, the photo with my son sitting in our unrecognizable kitchen…Sophie had brought up the dividers from the garage. she some how found our table cloth…classic violin music playing softly in the background.(we were informed the violin player was behind the screen & to speak softly so as to not disturb him.)

She told us, after listening to our gasps of pleasure, that we were now in her French restaurant. the food was great. The delivery of our food, from our French waitress, was the absolute highlight of the evening. Her menu was delivered in a French accent–French words intermingled with English & a bit of…make-it-up-as-i-go-along, unbelievable fantastic & hilarious words:

“Welcome. What can i get you this evening? Would you like to begin with an appetizer?” She said.

“We would like what ever the chef’s suggests” I answered

“Very good, we will begin with a basket of baguette, served with a le olive oil. and the chef recommends Cran-wine (cranberry juice in our best wine glasses)

which will be served with le blood extracted from rhinoceros tears” (it was Heinz ketchup, held in her hands, as though it was a bottle of Moet & Chandon’s Dom Perignon, Champagne)

She goes behind the screen again & comes out speaking with an Alabama country Southern accent, holding mac & cheese (her own recipe) and says, “and last we’ll be havin’ mac & cheese, which is a vegetable in the South.”

Sophie had run out of energy by now & didnt give our dessert–ice cream served on a barely toasted waffle, covered in hot fudge, with pineapple wedges, as seen below, a name.

A night none of us will ever forget. How very lucky i am. 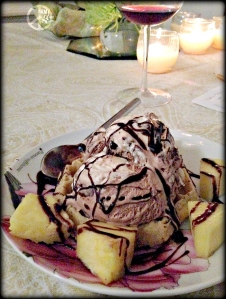