The kids & I have been trapped in our house for four days because of snowfall on Tuesday in Birmingham, Alabama.

A little background history first. I consider myself a Yankee. My (now ex) husband informed me that I’ve lived in Birmingham Alabama for as long as I lived in Vermont–half my life. My Vermont history is on my mother’s side. My mother’s brother, has been in Birmingham since the late 1960s. (teaching at the Optometry school) Alabama has always been on my radar because my uncle & his family lived there, or rather, here.  I remember the powerful snowstorm that dumped two feet of snow on Birmingham in 1993.  I remember it because:  1. it made the national News  2. because the same storm dumped 2 feet of snow on top of all our Vermont snow. 3. My grandparents were very worried about my uncle & his family. 4. Every winter I am here, people in Birmingham recount the same storm & the details of their week of being snowbound.

The difference between Vermont & Alabama’s history of events of the 1993 storm are astounding. In Vermont, I shoveled the snow off the windows of my parked 5 speed Mazda & drove to work.  The state of Alabama, closed.

I have lived in Birmingham Alabama since 1993 (I arrived in August of that year) Last week, Birmingham weather forecast had called for snow. No worries, a slight amount.  Grocery stores emptied of milk & bread.  I decided to do nothing. Based on prior evidence of Murphy’s (Law) favorite pastime…which is watching the weathermen go bonkers & then making them look like fools. Not one flake fell. Go Murphy.

On Monday, January 27th, I read the weather forecasts–all of them. The forecast was, “SNOW IN SOUTHERN ALABAMA.” It was supposed to snow south of us. Birmingham was to get a dusting.

Last check of local weather maps at 11:00 monday night, the ‘moisture’ line had risen north in Texas. At 3:30am, I wake to the sounds of my 10 year old son moaning in pain. His bedroom door remains closed at night because of our cats wanting to sit on his head.  The heat was running more then usual & it had dried up his sinuses.  I checked the weather on my iPad (because I was now AWAKE) & again the moisture trail from Texas toward Alabama had moved north-east, Texas had cancelled their winter storm warnings.  I remained awake until 6:00 am, then fell deeply asleep 10 minutes before my alarm clock buzzed (thank you, Murphy) Before falling asleep, I had decided that the kids were staying home.  This decision was reached through very scientific conclusions.  1. i had no sleep 2. my three kids went to three different schools 3. the Junior high school was 9 miles away  4. carpool sucks 5. Murphy’s law, it will snow, because our forecasters were NOT freaking out. Snow south of Birmingham?! It was too much of a punchline. It was too good for Murphy to pass up.  I told the children that they were staying home.  My 18 year old daughter, I gave her the choice–but only if she looked at me while I gave her the “driving on ice & snow” talk without rolling her eyes.  And the high school is 2 miles away & my car is 4 wheel drive. She chose to go.

I took the dog out for a pee around 9:15. I know the smell of snow.  I saw the sky was full of it. The snow began to fall around 9:30ish. I sent my daughter this text 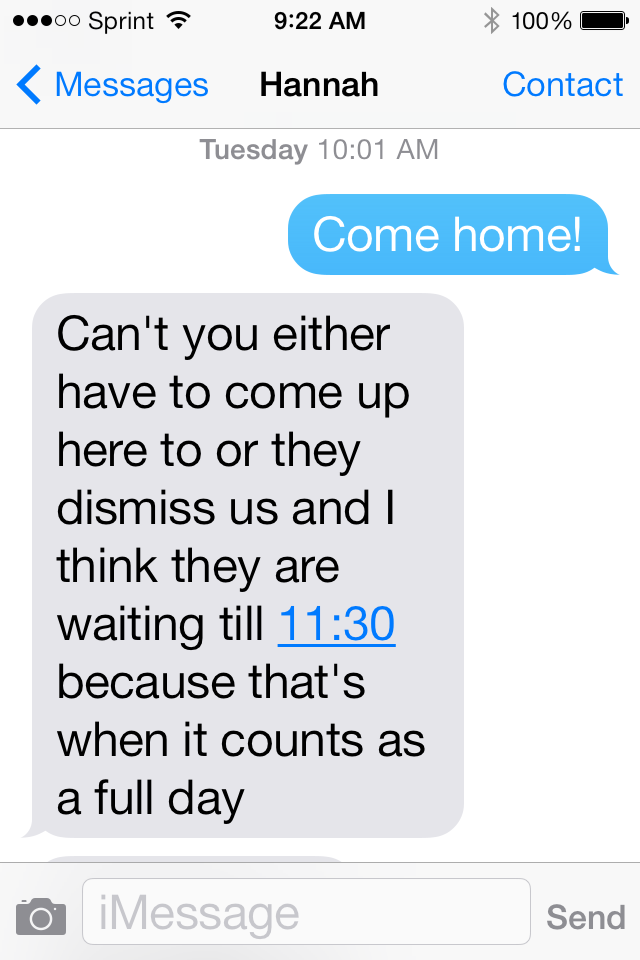 Her next text came a few seconds later, “They just dismissed us”  It was too late for her. She became trapped by car accidents.  She ended up staying at a friends house & walking home the next afternoon. My car was stuck at the high school.

Today is Friday. I have not taken the 4 wheel drive Jeep out of the garage since Monday.  The schools have remained closed for the week.  My (now ex) husband called this morning at 7:30 to tell me that his flight has been canceled & will not return until tomorrow.  My response?  “Oh, thank God, phew…” Why? Because this is my driveway 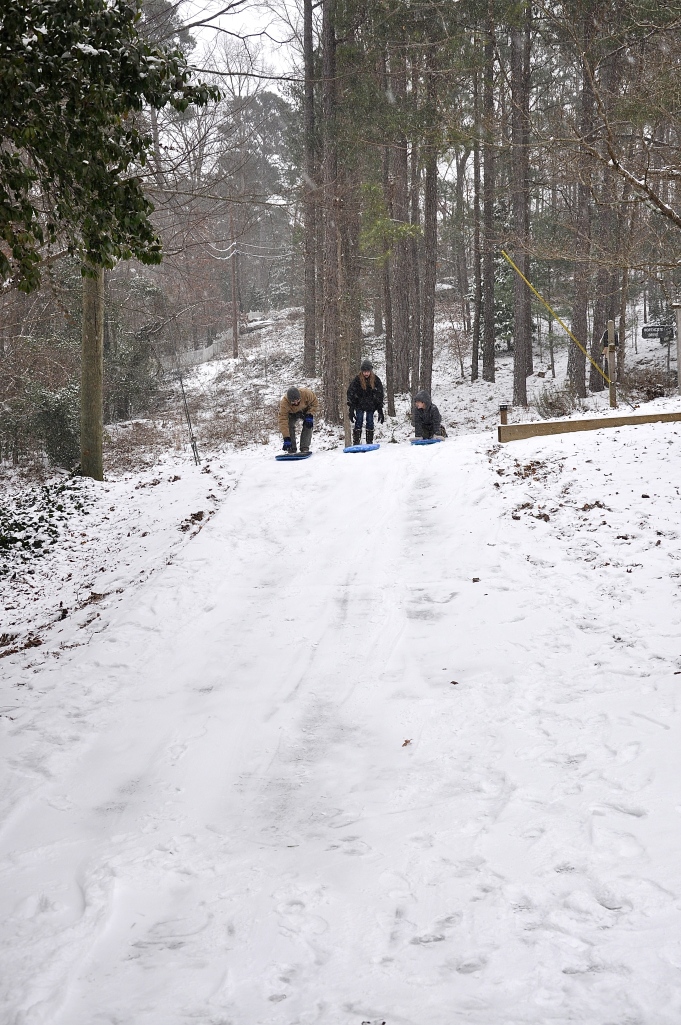 This is the hill in front of my house/driveway

And this is the road I drive on every single day

But I’m a Vermonter…2.5″ of snow is nothing to a Vermonter. Yes, it is nothing, if you are in Vermont.  In Vermont, their roads are plowed before you wake up. In Vermont, the roads have been salted after every storm. In Vermont, they have winter or all season tires on their automobiles. In Vermont, everyone owns a front or four wheel drive auto (SAAB, Volvo, Subaru, Jeep, Ford Explorer…) . Vermonters have kitty litter or salt & a shovel in their trunks, some have tire chains. In Vermont, they stay home if a storm is coming. Vermont weather forecasters are pretty down to earth because they say snow & cold almost everyday…they never freak out with graphics & five hundred reporters at every grocery store talking about milk & bread. ever.

The end of the Appalachian mountains ends at about Birmingham (home) Alabama.  Birmingham has mountains & it has very big hills. It looks a lot like Vermont, but no snow. Imagine snow on a slide…this is why Birmingham shuts down.

Murphy doesn’t fool anyone up there. Northerners are expecting Murphy at every turn. (Snow in June, well, yes!) Why do you think Yankees speak so quickly, words strung together like a beads on a necklace?  Why do Yankee’s drop at least three F-bombs  in one sentence? Why are Yankees in a damn hurry? Why do Yankees seem so mean??? It is because they are cold 7 months out of a year.  Yankees speak quickly because it’s too #@^*ing cold & there is nothing to talk about, other then the %$#@ing snow.

Some people define ‘talking about the weather’ as small talk.  I don’t know why that is.  Weather dictates everyone, everyday in every way possible. It molds us & our reactions to one other. it can change our plans, cancel events, make us stay home, what to wear, how many layers, etc…I am Yankee born & raised, it is at my core. I have lived that life.  But now, I am southern by marriage, my children southern born & raised.

The forecast calls for tempatures in the mid 60ssss tomorrow & the snow will be gone, as will as your turn for a tow truck.

ps all photos were taken on tuesday or wednesday. i’m too lazy to go outside.