My parents went to Scotland last September. They brought back stories of their adventures & photographs as proof of them. They also brought back a name of an author who writes a series of mysteries that take place on the Isle of Lewis. There was a tour of locations of the Isle of Lewis that matched descriptions of places in the books. As my family was completely unfamiliar with Peter May’s mysteries, they decided to read them once they got home. And introduced the series to me.

I am a bibliophil – sounds criminal, but it means, ‘a person who collects or has a great love of books’ I would be a collector if i had the means to do so. I am a lover of books thanks to the library. I am a lover of history. And while Peter May’s stories take place in Scotland, they are not historical mysteries. The third book of the series is titled, ‘The Chessmen’ there is a brilliant, but misunderstood & isolated character, that carves large chessmen. The book explains that the chessmen are based on a set that washed up on a beach on the Isle of Lewis. I googled it to see if it was true. It was!

The Isle of Lewis Chessmen.

After i read their history & saw photos of what they looked like, I had to have them. I looked online for a set. The British Museum Store sold the pieces for 575.00 pounds, or they sold one piece at a time, the king being 12.99 pounds, the rest 10.99 pounds each (pretty shabby of them to price a *queen less than a king)

The price of pieces online, with and without the board, range anywhere from $149.00-$218.98. Amazon sells the official set from the British Museum (the pieces only) for $218.98 plus $6 for shipping. The National Museum of Scotland sells a 9″ set (men & board) for $50.00 (amazon). The pieces are red & white, on a very cool Celtic looking board. Too tiny to be able to admire the craftsmanship of both men & board.

I found a set of chessmen only on ebay for $65. You do get what you paid for. The pieces looked very cheap, but they were HUGE.

Please note that the chessmen do NOT fit on a standard chessboard. I googled prices for a nice 25×25 inch board…again, way out of my price range. So i went to Home Depot & found a 25×25″ piece of semi rotten plywood. Someone had it cut & then didn’t want it. What an incredible find!

The Knights meet on my original chessboard. Sitting beneath is the plywood i bought from Home Depot.

I placed my pieces on the board, it was perfect. Now, how do i get the lines straight? And the squares the right size?! I asked a friend who is way better at math than i am.

He put the chessboard on the back in sharpie. 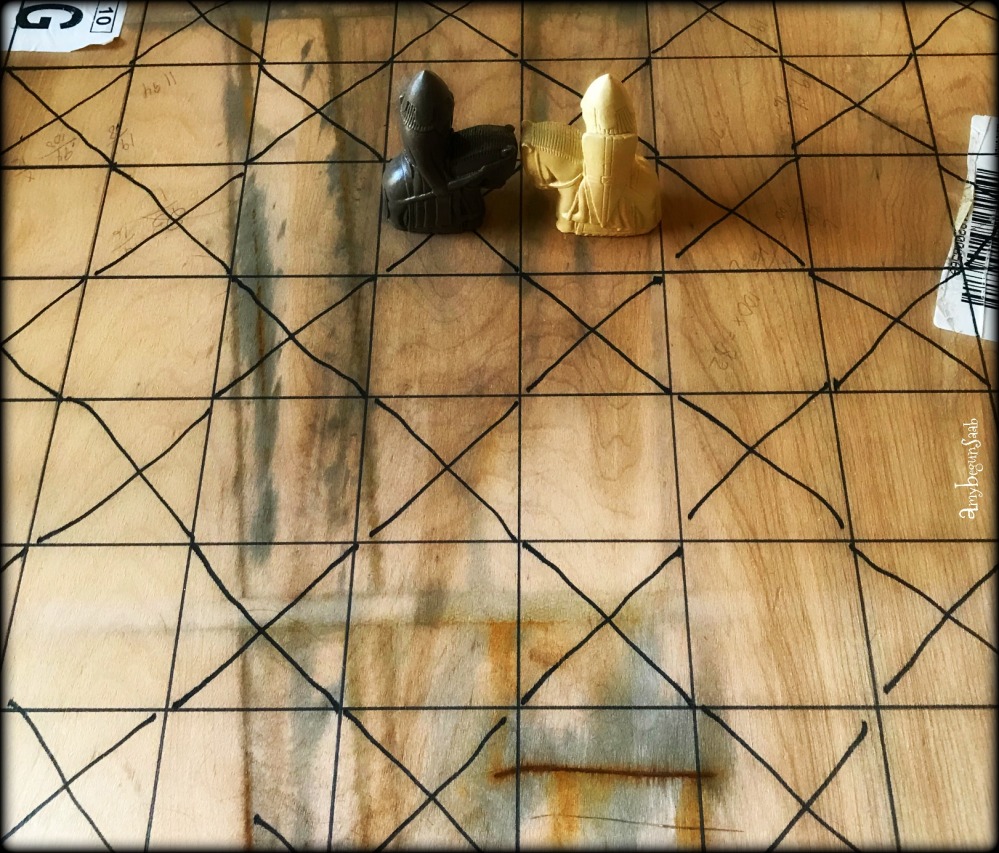 The cats loved to sit on the board. Gatsby looks like he is challenging me to a game. He looks far too serious. I declined. 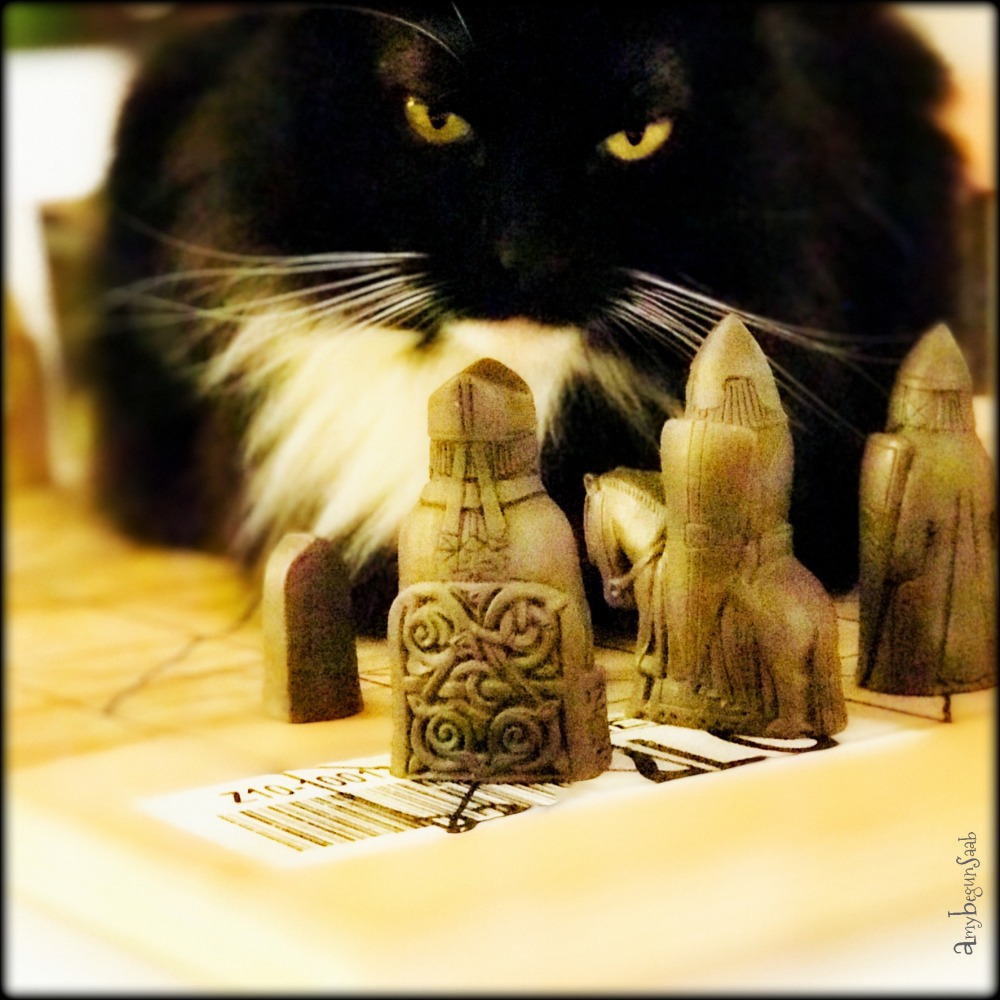 Then i started the long & boring taping & painting of the squares. I used painters tape to give me straight lines. However, the tape doesn’t do well with craft paint…it did pull some paint off. Every. Damn. Time. But i used what i had on hand.

I could only paint every other row because of the painters tape. This took forever. Each square needed four coats of paint – because i used cheap craft paint i already had & painted on a semi-gloss board primed white. If i do this again, i’m buying good paint & flat primer.

At the same time i was working on the board, i began to paint the chess pieces to make them look antique. 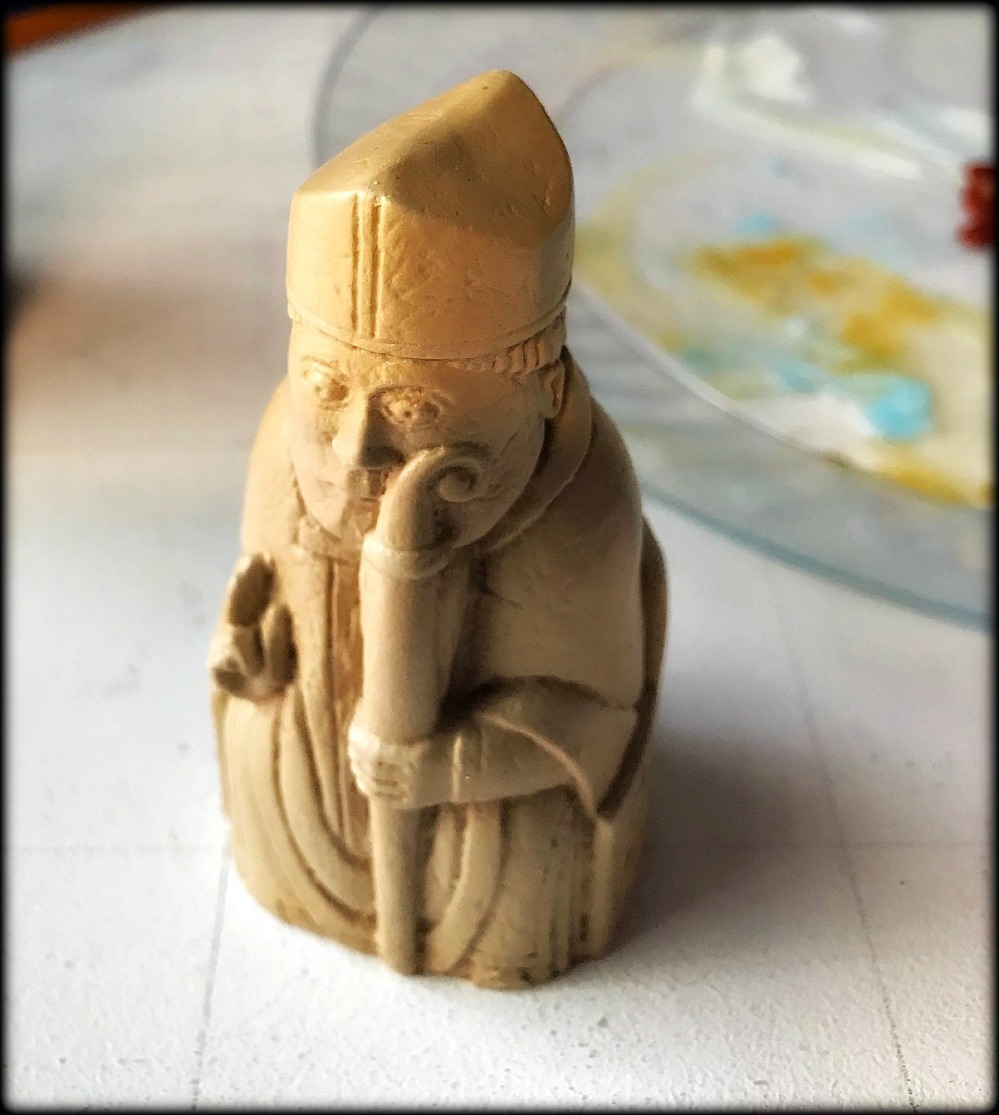 This is what they looked like before i painted them. This is the Bishop.

Painting the pieces was literally a very hands on project. I used a big paintbrush to rub the paint in deep into each piece, than i would wipe off the paint using my fingers. I was attempting to fill all the crevices with paint. This added a lot of detail to each piece. I am so glad i did this. I never would have noticed the dragon on the back of the king’s throne. I would have missed all the detail in the Celtic designs. The painting of the chessmen may not be perfect, but they are perfectly mine.

Once the board’s squares & border was complete, i wanted to stencil in some Celtic designs onto the squares. Looking for Celtic stencils measuring 2×2′ was almost impossible. After searching forever, i found a set of three Celtic stencil designs. The stencils were/are designed to decorate cookies. (“After the cookie has cooled enough, hold stencil above cookie & shake some powdered sugar over the cookie…Great idea for St. Patricks day!”)

I’ve never stenciled before. I have now, and i can say with 100% accuracy, that i HATE it.

I took the photo with the bottle of glue so you can see how big the pieces really are.

I moved the board back to the art studio to add the letters & numbers on two sides. It looks green in this photograph, it is not. My cat challenged me to a game. I said no. See the detail in the King, Queen & Bishop’s thrones? Stunning.

I found a font for the letters & numbers that i liked & painted them in gold. Then i varnished the table several times.

I had been gifted a small end table. The table had a broken foot, the piece had fallen off, making the leg too loose to hold the table upright.  I went at it with a drill & some screws, it is stronger now than its ever been. It has to be, as the board is heavy & much wider than the surface of the table. I bought large, strong flat magnets that i glued on both the bottom of the board & the top of the table. I did this so the board can be moved & a game played anywhere. 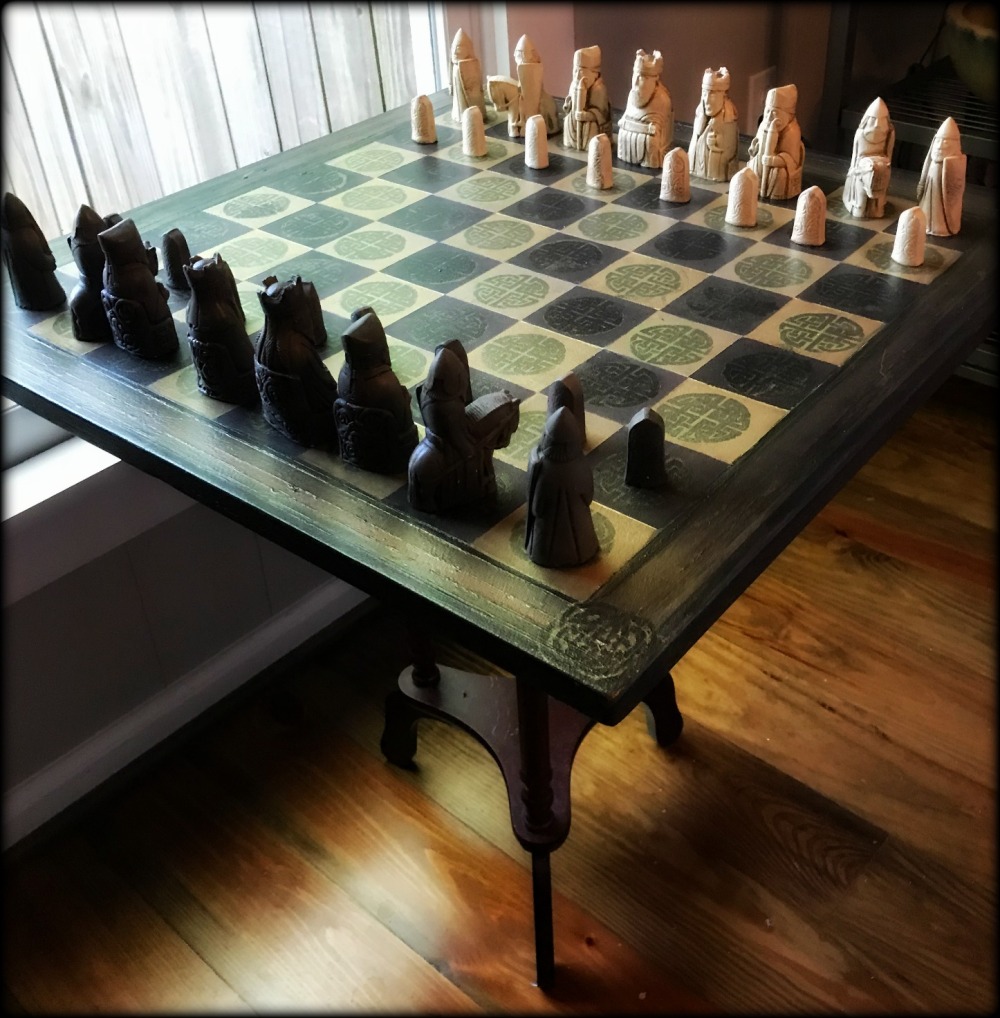 The finished project! I paid $65 for the pieces. The whole project cost me less than $100.

I love taking on projects like these. Turning trash into treasure. Born of necessity really, as i do not have money in my budget for things like this. When my kids were babies, i couldn’t afford all the cute furniture or rugs with characters/flowers on them. The only way my kids could have nice things was for me to figure out how to make them. I would copy someone else’s art onto unfinished furniture – this was how i learned to paint (i am a self taught artist). I think it is more fun to create things like this than it is to shop for them.

Not that i’d ever turn down money or shopping.

*”A king may be the most important piece on the chess board. However, the Queen is the most powerful, as she performs more moves than any other token. Men, take notes.” ~Karim R. Ellis

I am Queen. ~amy saab